Share with other members stories about your memorable encounters with birds, favorite bird books and other media, and funny or educational tidbits about birds you have discovered. Some of the BAS board members have started the sharing process by writing about their “spark” bird that set them on the path of bird appreciation and conservation. We invite you to share your stories by submitting them to Webmaster@bexaraudubon.org.

What Was Your "Spark" Bird? 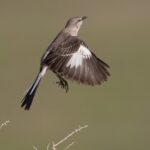 Patsy Inglet: When I was five years old, we moved next door to my Dad’s mother—Ma as I called her. I seemed to always be over at her house (there was no Kindergarten back then), and she loved to teach me things: how to count to 100 in German; how to iron pillowcases; how to recite poems. Above all, she loved nature and all its creatures, especially birds, which she said share their happiness with us through their songs. One day, Ma found a mockingbird in the yard that had been injured—how she didn’t know. One of its wings wouldn’t work right, so it couldn’t fly away. She rescued the bird and together we created a place for it to get better on her screened-in back porch. She taught me how to be kind and gentle and even showed me how she could splint the injured wing so it could heal. I got to feed the bird sometimes, and all three of us would “dance” to the little songs that Ma would sing—bouncing up and down to the rhythm. As time went by, the injured wing did heal, and one day we took the bird outside and released it back into the wild. Ma said that nature would take care of it now—that we had done all we could. Maybe that’s why I became a teacher and a dancer. Maybe it was the spark that now has flamed into my passion for birds and their conservation all these many years later. And why the sassy Northern Mockingbird’s song always makes me think of Ma and our happy times together.

Anne Parrish: The bird that sparked a feeling of thrill in me for the first time was the Black-necked Stilt. When I first encountered this bird, it was in the 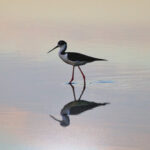 1990s at Mitchell Lake. Its regal strut in the skim of water in the wetlands there captured my imagination. This bird’s black and white “tuxedo” coat feathers and its specialized beak designed to probe the mudflats for food made me yearn to protect that special spot so the bird would still have a home in Texas. And that is what it is all about actually, each of us finding a special spot on Earth to nurture and protect. Because, after all, every place on Earth is someone’s or something’s home and the Black-necked Stilts still make theirs at Mitchell Lake in South San Antonio. Photo by Ansen Seale.

BAS President Patsy Inglet is writing a series of articles about different bird species for the Alamo Area Master Naturalist (AAMN) newsletter. The articles will be added here after they run in the AAMN newsletter.

The birds in the Cuckoo family (Cuclidae) that live in our part of Texas do NOT sound like the clock that hangs by my backdoor: that’s the sound of the Common Cuckoo of Eurasia, where the clocks originated. But the three Central Texas species that will be featured in this 3-part series ARE a wonderfully diverse and interesting bunch of, well, cuckoos. 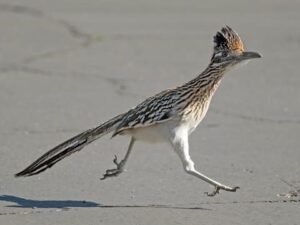 Familiar to many cartoon fans as the nemesis of Wile E. Coyote, the roadrunner’s real natural history is much more amazing. Roadrunners are ground cuckoos that live in hard scrabble arid country and thrive with adaptations including solar panels above their tails and a gland in front of the eye to excrete excess salt. They will eat literally anything: rattlesnake rattles and lizard scales, insect bodies and wings, bird feathers and bands, and bat teeth have all been found in roadrunner stomachs.

Called paisano—“friend or pal”—in South Texas because of their habit of following a person on horseback, roadrunners are actually catching the critters that the passing human disturbs. Pairs maintain a long-term pair bond, renewing their vows annually with an elaborate courtship display, after which they both incubate the eggs and raise the young.

The roadrunner’s distinctive X-shaped footprints are used as sacred symbols by Pueblo tribes to ward off evil. UTSA has chosen Rowdy the Roadrunner as the school mascot. Rather than the bogus “Beep-Beep,” the male roadrunner’s call sounds like a puppy left alone in a dark box—whiney and pitiful.

Brad Wier, Field Investigator at San Antonio Water System, shared this not-so-happy story about an incident that took place in May, 2020:

At a customer’s garage, a fluttering commotion under the car turned out to be a poor Northern Mockingbird stuck in a glue trap. (They’d placed traps in the corners by the garage door and the bird stopped by to pick at the stuck beetle and gecko buffet.)

Eventually the bird flopped out from under the car into the scorching driveway to where I was standing, dragging the trap and his body behind. Nothing I could do but reach down to try to free his feet. He was forced to tolerate this, though it had to be painful; he left no skin behind at least. He was able to free his other leg while I held the trap down and managed to fly off towards Briggs Ranch, minus all his tail feathers and a few others. According to my web research, these birds are usually euthanized at animal rescue.

His leg had all the heft of a stem of basil.