An energetic committee of conservation-minded individuals from Bexar Audubon Society led the effort to certify San Antonio as a Bird City Texas to join Dallas, Houston, Bastrop, and Port Aransas.

Bexar Audubon Society has made grant awards to fund 14 community initiatives that support the goals of the Bird City program. BAS Mini-Grant awards for 2021 were made for the following projects:

How You Can Help Prevent Bird Window Collisions 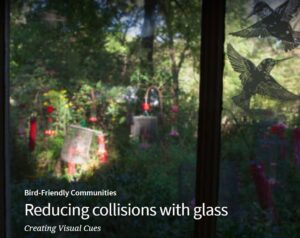 From Audubon.org: Birds face innumerable threats in our human built environment and our glass surfaces are one of the biggest. During daylight hours, birds collide with reflective surfaces when they stop to feed or rest, when avoiding a predator or flying from tree to tree. Shiny glass exteriors, internal plants near windows, glass corners, and greenery close to buildings can all be deadly as birds are unable to distinguish reflection from open flyway. For every collision victim found, three more typically go unseen, flying out of sight before falling or being carried away by predators.

Read more about how you can help.

A steering committee led by co-chairs Britt Coleman and Sherie Gee and representing a variety of concerned groups, such as the Mitchell Lake Audubon Center, Native Plant Society, San Antonio Parks & Recreation, and many others, completed an application and submitted it in December 2020 for San Antonio to be certified as a Bird City Texas.

On February 11, the announcement was made that their efforts paid off! Read the press release from Texas Parks & Wildlife Department here. But our work isn't finished; we'll let you know about upcoming opportunities to get involved in carrying out our Bird City Texas projects. 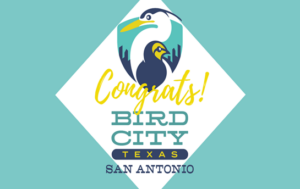 Check out this video from Texas Parks & Wildlife. Click here for a flyer about our Bird City Texas efforts. 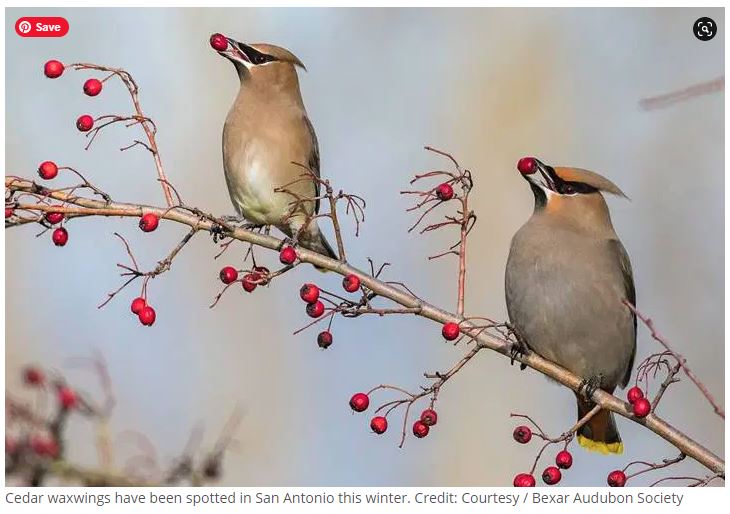 The San Antonio Report's Feb. 13 article (Cedar Waxwings photo above is from the story) features BAS members who worked very hard on the Bird City Texas (BCT) application and outlines some of the upcoming BCT-related projects we'll be undertaking with help from volunteers.

Society. The Fund is used to support community conservation initiatives that further the goals of Bird City Texas within the geographic region served by BAS (Atascosa, Bandera, Bexar, Comal, Guadalupe, Kendall, Kerr, Medina, and Wilson counties). Donors to BAS may designate this fund when making donations. Donations into this fund will either be allocated during the current fiscal year or rolled over to the following fiscal year. 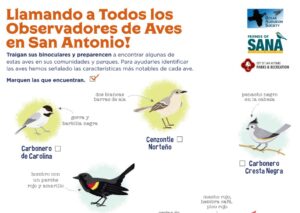 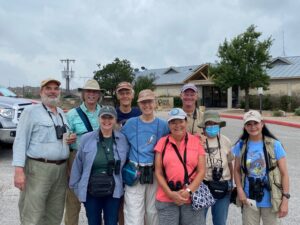 A group of 10 BAS member surveyed birds at Cedar Creek Golf Course on July 12 as part of our Bird City Texas efforts. Close to 30 species were seen, with highlights being a Yellow-throated Vireo and wild turkeys. 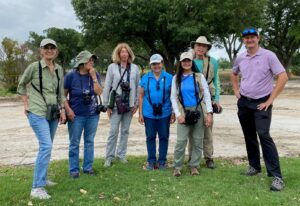 On May 31, 2021, a group of Bexar Audubon birders met at the Olmos Basin Golf Course to do a bird survey as part of our Bird City Texas responsibilities. More than 30 species were found on the course, which has been closed since January for reconstruction. The course is one of the eight golf courses in the Alamo City Golf Trail.

[San Antonio, Tx. December 4, 2020] The San Antonio City Council voted unanimously in council session December 3, 2020, to support the Resolution that annually recognizes WORLD MIGRATORY BIRD DAY (WMBD) as being significant to the city and community at large. San Antonio is in the Central Migratory Flyway and is an essential stop for migratory birds in both spring and fall due to the diverse ecosystems found in Bexar County. The resolution further recognizes Mitchell Lake Audubon Center (MLAC) located just south of San Antonio. MLAC conducts a celebration of WMBD every spring in early May with many educational community outreach programs featuring birds and the habitats in which they live.

Learn Why It's a Bad Idea to Feed Ducks Bread 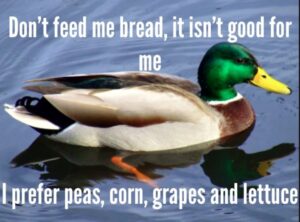 You see people feeding bread to ducks at area ponds, lakes and rivers all the time. But a diet heavy in breads and other empty carbohydrates can lead to severe health consequences and numerous additional problems for ducks and other water fowl. Read more about why it's a bad idea to feed ducks bread. 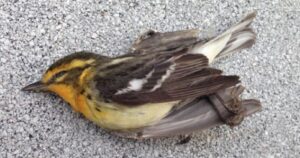 Arthur Melville Pearson, CEO of the Roger Tory Peterson Institute of Natural History,  has a written a sobering essay called "The Fall of the Sparrow," which really brings home the most unfortunate ways that light pollution and window strikes bring down birds--possibly ONE BILLION die a year. Click here to read this powerful article.

YOU can ACT to make San Antonio More Bird Friendly! 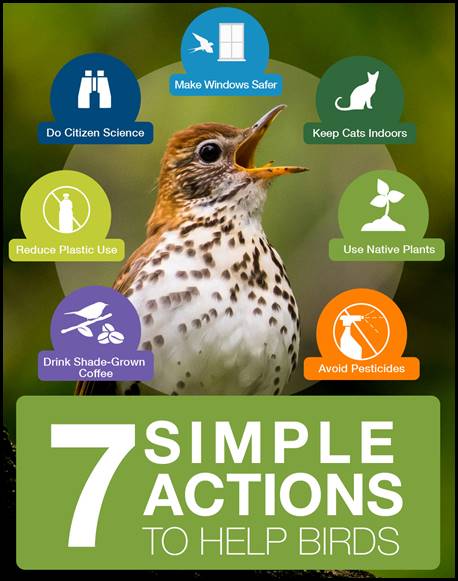 Do Citizen Science: Enter your bird sightings in eBird. Post photos of birds, plants, animals, butterflies and other insects to iNaturalist. Use the Merlin bird ID app to help identify the birds you see. Participate in the local Audubon Christmas Bird Count and Climate Change counts.

Make Windows Safer: A variety of products are available to place on or next to windows to prevent birds from hitting them. American Bird Conservancy offers several items on their website. Learn how to make a Zen Wind Curtain or purchase one from Acopian BirdSavers. Watch a couple of brief videos about how turning lights out at night can help migratory birds. Video 1 and Video 2.

Avoid Pesticides: Native plants are your best defense against pests. Texas AgriLife has an informative brochure, "Low Impact Pest Control for Everyone," featuring natural remedies for insect and pest control.

Reduce Plastic Use: Audubon offers the informative article, "Eight Easy Ways to Reduce Your Plastic Waste." If you live in San Antonio, review acceptable plastics for recycling on this City of San Antonio webpage. We have a Thoughtful Consumer column on the Bexar Audubon website with ideas for non-plastic products to use around the house. 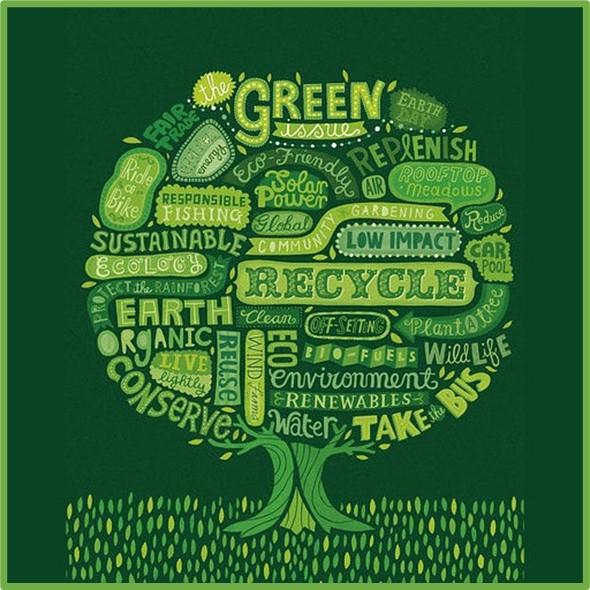 Save Water: San Antonio Water System (SAWS) offers a variety of water-saving programs on their website.

Conserve Resources: Learn how reducing, reusing, and recycling can help you, your community, and the environment by saving money, energy, and natural resources.

Cut Back on Chemicals: White vinegar, rubbing alcohol, and baking soda are all great ingredients you can use to make your own household cleansers.

Turn Your Lawn into a Xeriscape: In urban areas of Texas, about 25 percent of the water supply is used for landscape and garden watering. Creating a xeriscape with native plants is a good way to provide food for birds and butterflies while cutting back on your water usage.